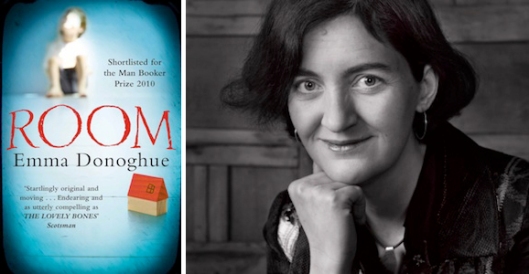 I saw this book in the public library and I took it out because I had read some positive reviews about it, and I finally began to read it when Rebecca talked about Jaycee Dugard in her blog.

Room is narrated by Jack, a five-year-old boy who lives with his mother in a room. We meet them the day of Jack’s fifth birthday and he is really excited about it because he will have a cake and a present from Ma… and from nobody else. Jack’s mother was kidnapped seven years ago when she was nineteen by a man they call Old Nick (but this is not his real name), who comes some nights to provide them food, take the trash out and rape her. Jack sleeps in the wardrobe and his mother tries to hide the boy from Old Nick’s sight, as a way to protect him.

Jack doesn’t look like a five year-old-boy: his language, reading and numerical skills are impressive and his imagination is as their room is small. His mother has pretend that the things they watch on TV or they read in the five books they have are not real, so for Jack things like animals and trees “are just TV” and he really doesn’t miss anything because everything he knows that exist is in Room. He calls the things in the room as if they were people, not just objects, so he says “Room”, instead of “the room”, or “Table” instead of “the table”, and I found it very curious because when he does that, he has to provide the objects a gender. In Spanish every object has his own gender and sometimes Jack calls something as a masculine thing when in Spanish it is feminine (for example, the door – la puerta).

I think Jack’s mother carries out an amazing role all those years since they have an established routine and we can almost say they were busy all day. She invents games for him, she tries to get healthy food from Old Nick for Jack, they do exercise, they lie under the sunlight that comes from the skylight when it is sunny to get vitamins, etc. In fact all she really wants is to keep him safe and healthy because Jack is all she has in the world now, literally.

The book has 5 parts: Presents, Unlying, Dying, After and Living, so you can imagine that yes, they manage to escape and the book turns into something absolutely different: Jack is scared of everything and everyone and all he wants is go back to Room, his home. His mother (we never know her name) has to deal with all the doctors that say she might be traumatized and with her family; a family that has changed and has to accept their daughter is alive and has a boy by her kidnapper. All that she wants is to have a normal life again.

I thought the book would talk more about the time when the girl was kidnapped, which could be more intriguing than two people with an established routine in a room, but it was thrilling from the very beginning and there was a part in the middle of the book when I thought my heart was collapsing, so the story is amazing as it is. Perhaps the part of the escape is a little bit implausible, but I loved the book, and anyway they had to get outside of Room.

The author describes the way a five-year-old boy sees the world in detail, because in the first part we find him overly intelligent, but when he is outside he is really a normal boy of his age, and then we realize how scared he is in a completely different environment. And most thrilling is the fact that the reader always thinks this could be a real story, like Jaycee Dugard’s, Natascha Kampusch’s or Elizabeth Fritzl’s cases, and it is so haunting that you still think about what Jack and her mother will be doing at this moment.

My review in Spanish here
Keep calm and read 20 books in English challenge: 4/20

11 thoughts on “Room, by Emma Donoghue”