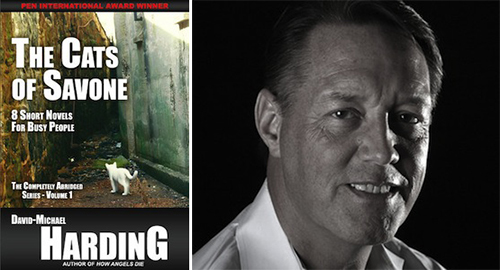 I was contacted by the author some weeks ago in order to read and review his new book, which is a compilation of short stories, and I couldn’t say no after enjoying that much his previous novel, How angels die (review).

2013 has been the first year I’ve read short stories; this was not my favourite genre because most times I feel like the stories are too short to my taste; as if they lack something to be complete. But then I discovered some authors who made me change my mind, for example the Spanish classical author Emilia Pardo Bazán, whose stories are just perfect in less than three pages; so since then, I don’t run away from short stories. Not to mention that thanks to the new Nobel Prize, short stories have become fashionable.

The stories in this volume, The cats of Savone, don’t have a common link; they include a wide range of genres such as historical fiction, contemporary fiction and even fantasy, with different characters, plots and sceneries, so every reader can find a story to like in this book.

You can also vote for your favourite in this link, because David-Michael is going to develop a full long novel from the most voted story. I think mine is the one titled Forever beneath the Celtic Sea, which tells the story of the crew in the German submarine U-20, the one which torpedoed the Lusitania and caused the US enter the First World War. It’s a story about guilt in war time: are you guilty of killing other people, or is the superior who gives the command the one to blame? I love war time novels; there are lots of topics to talk about and you always learn something new about history.

Do you read short stories?

Book on Amazon.com ♦ Book on Goodreads

6 thoughts on “The cats of Savone, by David-Michael Harding”