I requested this book via Virtual Author Book Tours because I have read other novels by this author and I liked them a lot. This is quite different, though: is still set in a southern state of the US, but is set in the present time, not in the sixties, like many of the other books I have before. 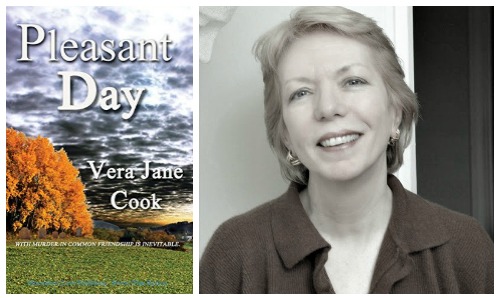 Pleasant Day is actually a teenage girl who is trying to solve a crime with the help of her friends in the village: a friend of hers, Millie, has been brutally killed and found in the house of another friend of Pleasant, John Peter. They only know that a man rang at John Peter’s door, and that he must have been the murderer. The police investigation is on, but nobody seems to have a clue about what happened.

On the other hand, we have Clarissa, a sixty-something woman with kind of psychic skills who, going for a walk one day, meets Pleasant and, to Clarissa’s surprise, the girl looks like her goddaughter who had been murdered several years ago. Clarissa begins to have visions that make clear that the two crimes have a connection.

Since I am a “family secrets lover”, I liked that part of the book. Pleasant discovers that her family has been lying to her, and Clarissa has to make some amends to have her goddaughter’s case reopened and that goes through uncomfortable talks with people from her past. We get to know everybody involved in the lies that neither Pleasant nor Clarissa had the slightest idea about.

These female characters were so interesting, especially Clarissa, who I think deserves a story of her own due to her psychic abilities. Her life is scheduled to the minute, but she has no luck regarding love relationships since her husband abandoned her for her – now former – best friend. I would also love to visit her house: it seems to have come out of a style magazine and the meals she cooks were so well described that made my mouth water. I also like the setting of the book, that southern village called Hollow Creek that sounds so picturesque to me.

What I didn’t like is that we don’t get to know the murdered until the end of the book. I mean, of course I don’t like the incognita to get solved at the beginning, but we don’t have a clue because this particular character is introduced at the end of the book, so it felt like I had been deceived because I couldn’t have known even if my detective skills were bright (they aren’t anyway). There is also a wrong explanation about two characters who are identical twins but they are a man and a woman, which is genetically impossible: they can only be fraternal twins.

Summarizing, I enjoyed the story of the two main female characters, but the end of the book didn’t work for me in this case.