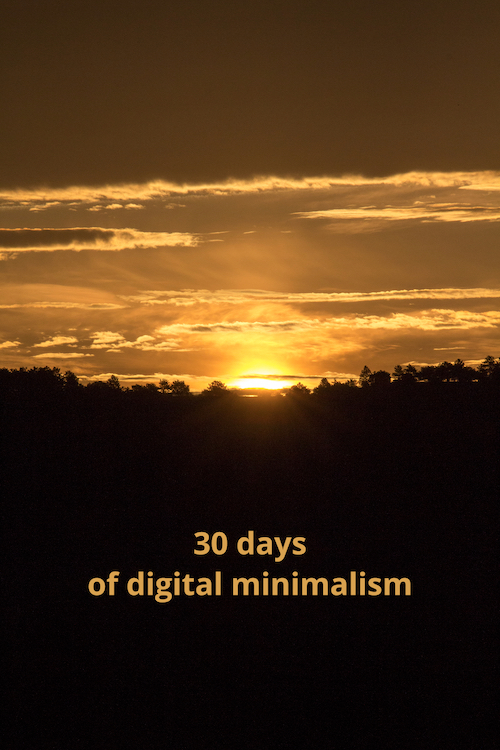 Cal Newport is an author I have been following for some time, as I am interested in his books and posts about study techniques, career advice, and deep, concentrated work. Now, with Digital minimalism, Newport has produced a manifesto to encourage people to be more conscious of their use of digital services while reducing it to the minimum.

As an unaware user of social media, I knew I was spending more time on it than I should, but what brought me to the book was the radical change of circumstances right after the coronavirus outbreak: I was working and studying from home but I couldn’t get anything done since I was spending my waking hours scrolling on social media and reading every piece of news. This is not the whole truth, I must say, because I was keeping many of my good habits regarding waking up and going to bed at the same time as ever; exercising once or twice every day, now without leaving the house; doing a bit of spring cleaning; and even trying some recipes and making crafts. I was actually enjoying the situation, safe at home and spending time with my partner, after months of different work timetables that prevented us from seeing each other much, but the struggle came every time I sat down with a screen, computer or phone, because I would open social media and news sites, as always, but I was now getting caught in a loop that kept me scrolling and refreshing to the point of not even opening the document I was supposed to be working on until 2 or 3 hours had passed by. So I read the book, I acknowledged I had a problem, and I tried Newport’s approach: I got rid of social media for a month.

In the book, you will find plenty of ideas about how necessary it is for our brains to be “bored” from time to time, to spend time alone, to engage in hobbies that make us be creative, to maintain face to face conversation with others… All those things that social media has transformed into interactions based on likes and shallow comments that have stolen our attention and have only brought anxiety and a lack of time for the things that we really value.

So I started the 30-day challenge by posting on my social media accounts about my endeavor, and then I deleted Facebook, Twitter and Instagram apps on my phone and I used Cold Turkey to block them for a month on my computer. I kept free access to WhatsApp, to communicate with family and friends; YouTube, my source of workouts during the confinement; the sports watch and its app, because it keeps me motivated to move; and GoodReads, a service as necessary as oxygen for a reader. I also blocked news sites so I could only access them at lunchtime, and I did nothing about Netflix or TV because I don’t use these services (and it would have actually been nice to find time for a good film or TV series, but it didn’t happen in the end).

I have to say that the first day was glorious: I finished the first draft of my End of Degree Project by working all day on it and writing about 9 pages without distractions, a huge accomplishment for me. Of course, I couldn’t keep that level of performance, but on the subsequent days I started to get work done and get on track with my studies, which was really stimulating. The number of books I read was joyously increased that month, and I started to resume writing on my Spanish book blog, which led me to announce my very first newsletter. Had I known how easy and satisfying my time away from social media was going to be, I would had become a digital minimalist much earlier, for sure!

However, I would also like to address the difficulties that I found during those thirty days:

This leads me to the final step of the process: going back to social media. The proposal of the book is to think carefully about how you want to use the services and make the proper arrangements: delete accounts, unfollow people you are not interested in, establish timetables and rules, etc. In my case, my desired strategy consists on, first, unfollow people and leave my account with a feed showing my real interests, books and all kind of crafts; and, second, keep the blocking during the week and access social media only on the weekend. I haven’t got around to do the former yet so, for the moment, I only allow myself to check social media on the weekends, but I don’t spend much time on it anymore.

I would like to end this long post with two final notes. On one hand, a warning: don’t rely on willpower to overcome the use of social media. That means don’t just turn off notifications or leave the phone inside a drawer; block and delete apps mercilessly instead of depleting your energy by constantly exercising self-control. I know this because I have had the notifications on my phone turned off for years, and look where I was. Above all, don’t fool yourself into thinking that you are cured, reformed, after the thirty days: recently I had two-week holiday with free allowance to social media and, from the first day, I was back to my old habits of checking and scrolling. These services are designed to get you hooked, so the best approach is to make them disappear from your life.

On the other hand, I have noticed that, without social media, your brain is naturally inclined to engage in new endeavors, and sometimes it is a bit overwhelming to have all these ideas when you are already engaged in other pursuits. It is as if your head is constantly producing unexpected and enticing projects now that it perceives you have more time and you spend it more consciously. This is definitely a positive outcome, though: to have lots of ideas plus the freedom to finally focus your time and attention on them.

Would you abandon social media for a month?

2 thoughts on “30 days of Digital Minimalism”