When I first came across this book, I didn’t bother to read the synopsis, assuming it would be a medieval tale of some sort (the illustration on the cover made me think so, the word “handmaid” helped as well); something I would enjoy, but nothing “special” I should consider reading as soon as possible, until I began to read about the TV series and the actual plot of the book. I found a medieval tale, yes, but not the kind I expected. 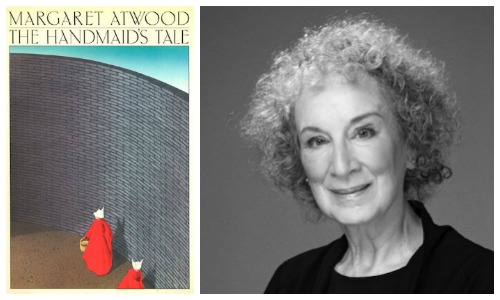 Offred (meaning “Of Fred”, the name of the man who owns her) is the narrator of her own tale, a story of a country that turned itself from a so called democracy into a patriarchal dictatorship in which a few privileged people live more or less as the time before, whereas the rest serve them. For the women this means they have to provide healthy children for the regime, but not freely with their husbands, but submitted to their owners and separated from their families. Love is forbidden. Friendship is forbidden. Culture is forbidden for women too. To make things worse, Offred lived in “the time before”, so she had to be reeducated in a special centre to serve to this new society, and she often goes back in time in her narration to talk about the life she had with Luke and their little daughter, her mother, her best friend Moira…

The book addresses the assumption of human adaptability to whatever the circumstances we face. The issue here is that the political environment doesn’t change for the better, for the achieving of more freedom and favorable rights for the people, as we foresee as the path for future generations, but instead it goes for restrictions and terror for the majority of the population. And as the author has said, this idea is not her own, but borrowed from history (nazism, for example). And yet the heroine is not so, in the usual understanding of a character fighting to take her life back, but instead she just goes with the flow, paralyzed by the fear and living the life this new patriarchal elite has decided for her. And that’s what I liked about her because, in my eyes, she is real. I mean, most of us have probably gone to a protest march against any political issue or another, but would you go if you were likely to be imprisoned for life, or even executed? I am sure I wouldn’t, and this fact made me sympathize deeply with Offred.

This is the second book by Margaret Atwood that I read (Cat’s eye was the first), and I have found them very different regarding the plot but with similar characters; both women, both confronting a situation they can’t or don’t know how to face, and both lonely and carrying such sadness over their shoulders.

PS1.: The ending, which will not be discussed here, was absolutely great because it is open to many possibilities.

PS2.: I listened to the audiobook narrated by Claire Danes and she is the protagonist in my mind. I love her, by the way.

Last academic year I studied a Master’s for Secondary School Teachers and, in addition to science’s subjects, we had a subject about teenagers’ psychology and learning, and one of the teachers talked about bullying. We also watched a film and we had to write an essay about it. Well, while I was looking for information, I found a reference to this novel in a textbook and I decided to read it, so I took the book out from the public library of my town.

Elaine is the main character. Actually she is in Toronto because a gallery is exhibiting her pictures; a retrospective of all her work. Last time she was in Toronto was so many years ago, and while she is there and reviews her old pictures, she remember parts of her childhood.

When her family arrived at Toronto she was eight. They had moved a lot because Elaine’s father was a biologist and he studied insects and plants in different places of Canada, but now he was going to work as university teacher in Toronto, so they were there to stay for a long time.

Elaine had never had real friends because she didn’t have time to keep a friendship with anybody, although she has been happy playing with her eldest brother. But now, in their new school, boys and girls play separately and they both have to make new friends. There’s also another reason: if you’re a boy and the other boys see you with a girl, although she is your sister, you’ll be underestimated. Elaine understands this, so she tries to stay away from her brother at school. That’s not a problem because she has her own friends very soon: two girls, Grace and Carol, that live in the same place as her, so they go walking together on the way back from school. They also play together at evenings and weekends (games that Elaine never had to play: girls’ games) and the family of her best friend, Grace, take Elaine with them to church on Sunday mornings because Elaine’s family isn’t religious; at first her parents didn’t want her to go to the church, but finally they thought she should decide by herself.

Everything is going well, but the next academic year they have new neighbours: her daughter, Cordelia, who is one year older than Elaine, is introduced in the girls’ group because she goes in the same direction as them on the way back from school. Cordelia starts to mess with Elaine, but not in a physical way; just psychologically, and Elaine doesn’t know how to defend herself from her. Soon, Cordelia becomes the group leader and the other girls also attack Elaine. They say anything about her posture in the chair or they keep her walking in front of them to comment if Elaine’s walking right; they stop talking to her if she says “something wrong” and other things like that.

Elaine feels very sad; she begins to stay at home at weekends and she always has an excuse not to go with the girls. In fact, she tries to do things right: she does her homework perfectly, she studies all the psalms for the religion lessons on Sundays (Grace has the role of keeping an eye on Elaine at the Church and, then, inform Cordelia about everything she does, etc. But, if Elaine does something wrong, they say she’s stupid, and if she does things right, they say she’s too perfect. And the sadder she feels, the more aggressive Cordelia is to her because it confirms she is making damage to Elaine.

The best way of stopping bullying is acting like you don’t care about it. The aggressor will leave you alone if he doesn’t get anything (to make you feel scared or worried). I suppose this is easy to say and it’s very difficult to do because if the aggressor is hitting you, how can you act like you don’t care? It’s impossible. And Elaine didn’t know anything about this and also she couldn’t tell anybody what was happening beacuse she really couldn’t understand that situation. Finally she gets separated from them but, for the rest of the courses in Primary and Secundary School, and also after it, in art classes, she can’t make new friends. She prefers to stay alone or talking with the boys, because she feels safer with them.

When she is now back in Toronto for the exhibition, she wants to meet Cordelia again; ask her why, what was the reason. She really misses having a friend. It’s a sad story.

My review in Spanish: here

This novel has been the first one that I have read from this author and I will read The blind assassin soon because I join in an activity called “Advent with Atwood”, purposed by the blog Reading with tea. We have to read the novel and every monday of December we are going to comment different parts of the book. More information.

I like this kind of activities and, in fact, I organize a lot of them during the year in my Spanish blog, so I was looking forward to joining in one of them in English. I have The blind assassin ebook ready in my kindle, and I also took it out this morning from the public library in Spanish in case I don’t understand a word, because I really want to comment the book with other people. Hope I like it.